First came the business idea. Then came the business plan that my daughter wrote, as I described in my last post. But as I said at the conclusion of that post, we had decided it was important to our business core values to create profits for a chosen charity. We didn’t have to make that decision, of course. We could have simply focused on creating a business that made money for us, the founders. And we do need the business to do that—all business owners do. But there’s more to life than making bank, as they say. It’s far more gratifying to feel as if you’re doing good for others. Helping as many as you can.

Agreeing on this value was easy. My daughter is very considerate and thoughtful so there was no persuading to be done. The question was, what charity to get behind.

We already donate monthly to St. Jude’s Children Hospital and have done so for a long time. We discussed sharing profits with that organization. But since we already donate personally, we wanted Naturally Grateful to get behind something else.

Part of my aim here was to expand my daughter’s awareness of how much need exists, of how many charities there are.  We looked at Charity Navigator and at the many categories of needs. We watched videos of the work that Make-A-Wish Foundation does and gave serious thought to that.

But Make-A-Wish and St. Jude’s both have serious name recognition. Don’t get me wrong, they do amazing, wonderful work. But they are well known. We really wanted to put our energy behind something important, but perhaps not as well known and understood.

A Kid, His Family, and Cystic Fibrosis

We live out in the country, pretty isolated. We have to drive at least half an hour to get to a Wal-Mart. And when we get there it’s not even a Wal-Mart. It’s a Dollar General. So we don’t exactly live where there are a bunch of kids playing on the street. There are far, far more deer, turkeys, bears, and coyotes roaming our neighborhood (if you can call it that…and you can’t) than kids. So to have playdates, friends come from 45 minutes or farther away, and we drive the same distance.

We’re fortunate to have some great friends with a daughter and son a bit younger than our daughter. And, like us, they embrace something of a preparedness/quasi-homesteading lifestyle. So they don’t think we’re radical whackos because we know how to grow and can food. And homeschool our daughter.

They too homeschool their children. And their youngest child, their son, has cystic fibrosis. This is something their family has had to live with every moment, every day, for his entire life—five whole years, as he says.

When we first learned this years ago, when we met them, I think my wife and I both likely silently said, “what the hell is cystic fibrosis?”

That’s a strange thought to have because I think almost all of us have heard of it. I’ve heard of it for a long-time and have no excuse to have not known more. As a lifelong Steelers fan, I was in-the-loop back in the 90s when NFL quarterback Boomer Esiason announced his son, Gunnar, was diagnosed with CF. I remember hearing about it and thinking, “wow, that’s too bad.” Then switching the channel.

The truth is I don’t have to live with cystic fibrosis. No one in my family does. But we have friends that do. And because of that, they’ve given us the gift of understanding. Of gaining insight into the toll this genetic disease can take, not only on the one diagnosed but on his or her entire support system.

We’ve relished the idea of joining them in the Great Strides walks to raise money for CF. It’s a nice thing to do and we enjoy it, but it doesn’t feel like enough. That’s because it isn’t.

The good news is that progress is being made. In the 1980s, few cystic fibrosis patients lived beyond their teens. In the last few decades, new medications and treatments have reduced infections and complications and increased life expectations into the 40s.

But that’s on average for all cystic fibrosis patients. Any individual with CF is at risk, at any time. And that’s just life expectancy. Cystic fibrosis affects so many other quality of life issues. For example, males are effectively sterile 98 percent of the time.

Oh…and then there’s the pills.

Between pancreatic enzymes, vitamins, Orkambi, ursodiol, azithromycin, and other medications, those suffering from cystic fibrosis can easily take 40-50 pills per day. Take a bite of food, take an enzyme. Eat a meal, pop a few enzymes.

It’s a lot to deal with. But, coming full-circle now to our perspective on gratitude, how wonderful is it that we have doctors and companies creating treatments to improve quality of life? Are things tough for cystic fibrosis sufferers? Yes, they are. Are they getting better? Yes…statistically.

But not enough people understand this disease. And not enough are involved to end this suffering. The stark statistical improvements in recent decades suggest (to me, at least) that a cure is possible.

Given that possibility and the idea that our family can help reach that goal within the lifetime of our young friend made our charity selection a logical and easy one. We will donate 20% of our profits to the Cystic Fibrosis Foundation.

To generate enough profits where we can make meaningful contributions, we’re doing our best to create attractive, creative, and unique expressions of gratitude. Every purchase you make not only helps fulfill our mission of spreading gratitude by wearing gratitude but raises money to fight cystic fibrosis. 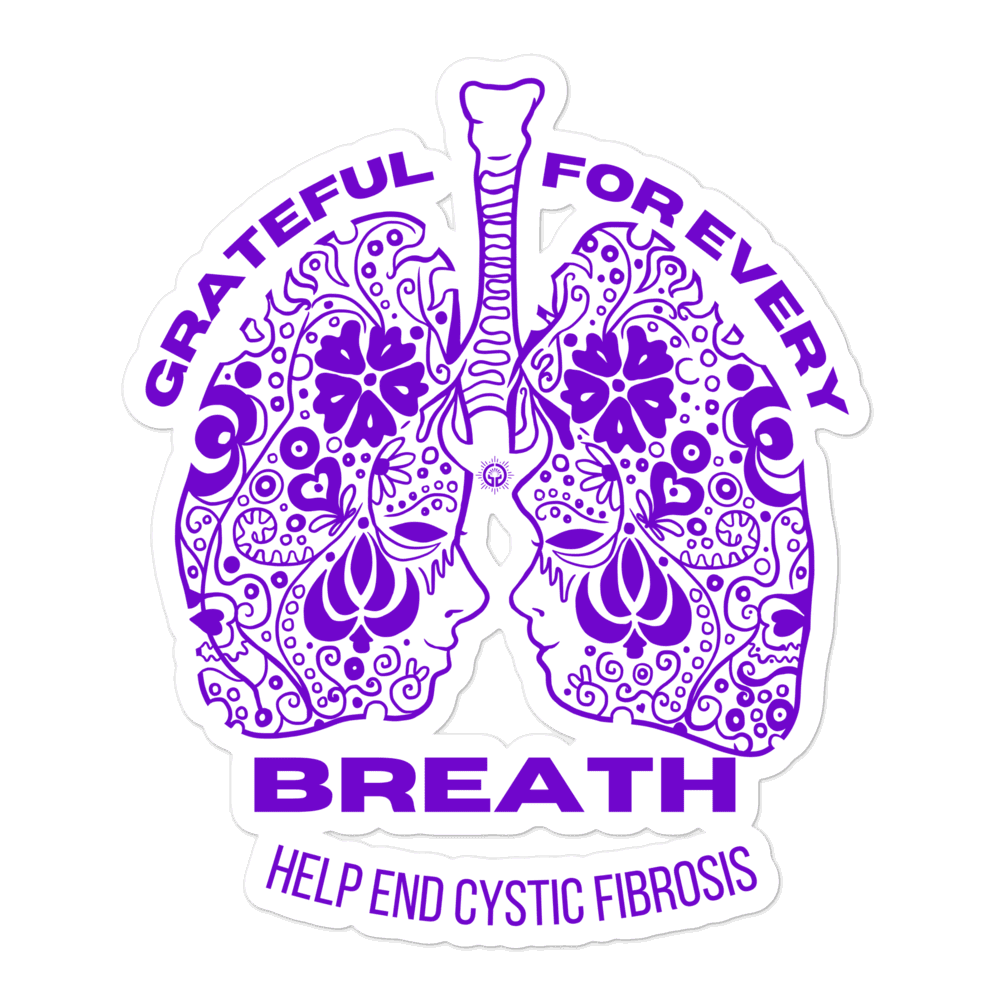 We can’t do that alone. We need you. And, as you might expect, we’re deeply grateful for your support.